In the last 4 days, I have shoveled my driveway 7 times.

There are piles of snow in my back yard that are literally taller than I am.  My back is utterly destroyed.   My arms and legs are tightened and sore.  My car has gotten stuck 3 separate times.  The wind blew the cover off my grill and it is currently covered in feet of snow.

I realize this is ‘mother nature’ and there’s nothing anyone can do but deal with it as best they can.   But I am incredibly angry about how much snow we have.  I have lived in Michigan for my entire life and I cannot recall having to deal with this much snow.

Tonight I resisted the urge to slam my shovel into the driveway with all my human might and destroy it with unbridled malice; because after I finally finished shoveling my seemingly never ending driveway, the end I had started on already had over an inch of new snow.

Ef you, whoever makes snow…  I will find you sooner or later and we will have a very confrontational discussion.

This week I decided to take up the task of setting up my old laptop as a “media center” for my 42 inch rear projection television.

The program “Boxee” is what sparked my curiosity and made me start pursuing this.

Boxee is a media center application based on the source code of Xbox Media Center (or, XBMC).  It has one simple and clean interface to various media outlets – including Netflix, Hulu, Youtube, Flickr, ComedyCentral, CNN, etc.  PLUS it will scan and index any media you have stored locally.  Bottom line, it makes a pretty sweet application especially when you have an open laptop to plug into your television.

At first, I fought Ubuntu linux trying to make the s-video output work.  Literally fought it.  And I lost.  This was most unfortunate because Boxee on linux is supposedly quite a bit more stable than Boxee currently is on Windows.

Finally though, I had to just give up and  install Windows XP.  I finally got an invite to Boxee (if anyone else would like one, let me know) and I downloaded the Windows version immediately.  My sheer enjoyment quickly turned to utter disgust because the lesser stable Windows build will not even start on my laptop.  It just core dumps immedately leaving a indecipherable message in my event logs.   CRAP.

Anyway… All was not lost.  I have a closed laptop hooked to my television that allows me to stream Netflix, Hulu, and is running XBMC.  I must say – it works pretty dam nicely.  I took it one step further by enabling Wake on LAN for the laptop; so I can shut it down when it’s not in use – but the laptop sits closed nicely and fits well between my HD receiver and my modded Xbox.

PS – WordPress 2.7 is just awesome.  All should install it immediately.

I really miss warnings in AIM.
I’m not exactly sure when or why they stopped working, but clearly AOL needs to bring them back.
I still have some pretty LOL screenshots of all my friends being warned up to 100% and barely being able to chat…
[Sigh…]
Those were the good ol’ days.
I would warn vanbergs and vanlandw immediately.

This new version of the dashboard blatantly copies the Nintendo Wii’s “Mii” functionality where you can create a mental projection of your digital self for all fellow persons and virtuosos to perceive.

It’s really the exact same functionality and it’s almost a shameless ripoff. But, the avatars you can create are a little more human looking and a bit more “grown up” overall vs the childish/anime feel of the Wii caricatures.

I’m going to start using my X-Mii as my profile picture on various online arenas, since the picture I use for nearly all my online profiles looks absolutely nothing like me anymore.

The picture above is my “Gamer Pic” but it is tiny.  Here’s the full Vanberge: 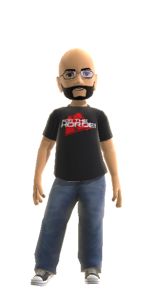